How did it come about?

Military Historian Tom Burnell (author of ‘The War Dead’ series and ‘Irishmen in the Great War’) presented to Tipperary Studies a most valuable and unique database of the names of Servicemen with connections to Ireland who died in the Great War, 1914-1918.

It is still a work in progress and so far the details of servicemen from the counties representing the Republic of Ireland have been completed, in so far as the information is known. Work continues to record the names of the Great War dead from the six counties in Northern Ireland.

It has taken Tom twenty years of research so far, and he believes the time is now right to release his database to a wider audience.

A ration party of the Royal Irish Rifles in a communication trench during the Battle of the Somme. The date is believed to be 1 July 1916, the first day on the Somme, and the unit is possibly the 1st Battalion, Royal Irish Rifles (25th Brigade, 8th Division).

A very young member of the Irish Guards, pictured at Waterford Barracks with the regiment’s mascot, an Irish Wolfhound.

How it was Created

Tom Burnell has researched contemporary newspapers, books, historical records and Ireland’s Memorial Records in compiling an exhaustive list of servicemen who died during the Great War or as a result of injuries received. The Archive has expanded on the list of entries recorded in Ireland’s Memorial Records and gives added detail about family connections, residence, etc., where such has been identified. The Archive is of great interest to military historians and genealogists.

The burial sites of British army soldiers in Co. Tipperary.

The burial sites, in Co. Tipperary, of service men who died in both the Great War and also in World War II have been identified. These are recorded on a separate searchable database, complete with identification markers as to where the grave locations are sited.

Complete with photographs of headstones and service information on each soldier, this thorough database of 43 separate burial sites from county Tipperary will be of great interest to anyone studying the genealogy of families with military links.

A note on the records

Why are some counties not listed?

As noted above, Tom Burnell has spent over twenty years researching the Irish Great War Dead. He has communicated with similar military historians throughout all of Ireland, Great Britain and indeed further afield.

The reason some counties are not presently listed in this Archive is that it is still a work in progress. The Irish Great War Dead Archive will not be complete until servicemen and servicewomen from all 32 counties of Ireland are recorded in it. The work to make this complete continues, but for the moment Tom wishes to share, to a wider audience, the fruits of his research. It is indeed hoped that individual submissions from similar researchers will help advance the recording of the names from the counties in Northern Ireland currently not listed, and to use two lines from the poem For the Fallen by Robert Laurence Binyon (1869-1943), published in The Times newspaper, 21 September 1914

At the going down of the sun and in the morning, We will remember them. 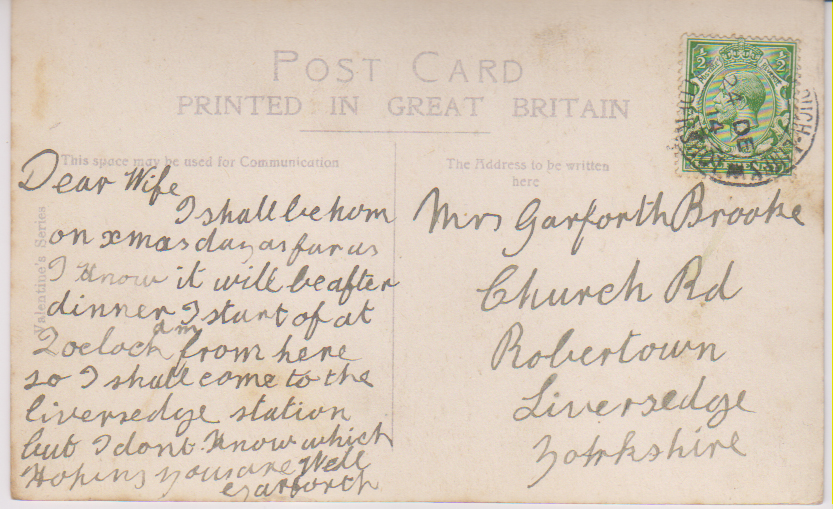 “I Shall be home on Xmas Day”
Postcard  from Aldershot Barracks sent on Christmas Eve 1914.
Donated to Tipperary Studies by Peter Holder of the Irish Historical Picture Archive.

In order for a candidate to be accepted for CWGC commemoration and War Grave status, they have to meet certain criteria. They must have died whilst in service with a Commonwealth military or died post-discharge of a cause proven to be due to, aggravated by or commencing during service within the qualifying dates (4th August 1914 to 31st August 1921 inclusive). If one of these criteria is met, they are accepted by the adjudicating authorities. The In from The Cold Project prepares submissions and forwards them to the authorities for all cases which it believes could qualify under the criteria.

Some names may be rejected by MoD due to lack of sufficient evidence or for other reasons. If a candidate was submitted but then rejected by MoD, it shows in the ‘Notes’ section of the War Dead Database. If he/she has been accepted for commemoration by the Commonwealth War Graves Commission, it is also noted in the ‘Notes’ section and the date of acceptance is recorded.

Over a thousand men and women have been put forward for consideration to the In from The Cold Project over and over 300 of these were submitted by the Project as potentially meeting the criteria. Recently, over seventy of the 300 were accepted for commemoration. The War Dead Database has not yet entered this information but will do so in the near future. Those IFCP submitted cases still awaiting adjudication by the MoD are all listed here.